Sober Houses Within Communities are Essential in Addiction Recovery 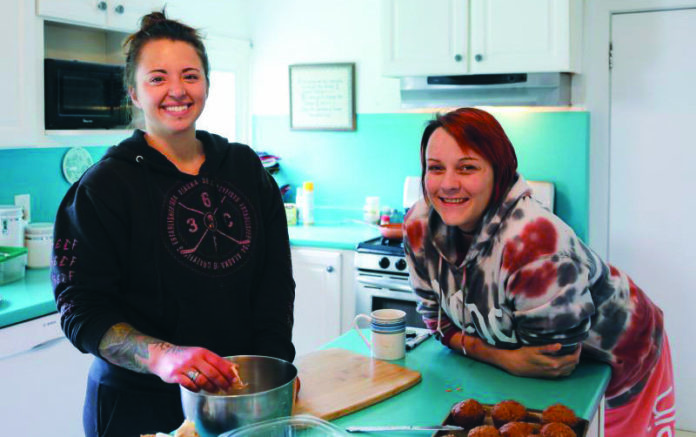 There are few among us who have not been touched by addiction in some aspect of our lives. Whether the struggle is our own or that of family or friends, nearly everyone knows someone whose life has been altered by it.

On a warm spring day, Sarah Sawyer is in the kitchen of the recovery residence in Camden where she lives. She is cooking breakfast for herself and her best friend, Alyssa Carey. Alyssa also lives in the house and is due to deliver twins in October.

The women’s lives were once linked by jealousy, anger, and the substances they shared. “I definitely wasn’t inviting her over for omelets!” Sarah laughs.

Today they are self-proclaimed soulmates.

Alyssa had been living with a man in Union. Her days were a blur of drugs and alcohol. The situation and the man were dangerous, and she was unable to leave the house. She was cut off from friends and family, including her then 4-yearold daughter.

“I just woke up one day and the realization hit me that I had lost everything. I missed my daughter for the first time in quite a while. I realized that if I didn’t do something, I would probably never see her or my family again.” Alyssa was in so much pain that morning that she dropped to her knees in surrender. When the man left for work, she called for a ride to the hospital where she admitted herself for detox and treatment.

At age 18, Alyssa had been involved in a near-fatal car accident, and her struggles with substance use disorder began with prescribed painkillers.

Alyssa had made other attempts at sobriety, but she was finally given “the gift of desperation” and says that it has made all the difference in her outlook and commitment to sobriety. Alyssa is upfront and admits that she initially needed her freedom restricted, and she needed to be held accountable to get her feet under her. These aspects are built into the agreement that all prospective residents must sign upon moving into the recovery residence.

Gradually residents build trust and personal accountability and the structure is eased.

Sarah had checked herself into residential treatment twice in her early twenties. “That was my first introduction to the steps” (the 12-step programs offered by Alcoholics Anonymous and Narcotics Anonymous).

The second time in treatment, she tapered off of Suboxone, a medication for opioid use disorder, but she continued to struggle. “I turned 30, and I was moving back in with my parents. I had nothing to show for my life. I started going to college, and was accepted into the nursing program. I was functioning, I even had a 4.0 GPA but I was still using. I don’t think that anyone was aware, but I just felt like a complete fake.”

Sarah totaled four cars in two years, and kept thinking to herself that some “big thing” was going to be the catalyst that would make her get sober. “Finally I figured that if totaling four cars didn’t do it, then what was it going to take?”

Sarah also says that the “gift of desperation” was a turning point for her.

Both women are grateful to have the recovery residence, run by the Midcoast Recovery Coalition, in their local area. “I went to residential treatment in New Hampshire but when I came home, all the people and temptations were still here,” Sarah said. “I had to learn how to be sober amongst all of that, because this is home.”

Both women now have jobs and a supportive community that includes many others in recovery. Sarah has a car that she is determined to keep for as long as possible. “No more crashes!” Both are paying off debts, rebuilding relationships, and thriving.

There are many 30-day residential treatment programs available, and while they offer an invaluable service, they can only lay the foundation for people whose real work is ahead of them.

Recovery residences offer a safe, substance-free place to live so that residents can focus on rebuilding their lives in their local communities.

There is no time limit on how long residents can stay in most recovery residences, as long as they are committed to their recovery and making forward progress on their goals.

Every person’s situation is different, as are the kinds of support they may need. The houses are staffed with dedicated people, some of whom have rebuilt their own lives after addiction.

Both Alyssa and Sarah feel certain that if the recovery residence had not been available when they were released from treatment, and they had no alternative to moving back into the community, they would “most likely be dead now.”

Midcoast Recovery Coalition is dedicated to helping families, friends, and neighbors struggling with addiction. They are a nonprofit, 501-C charity and as such, depend on charitable donations.

Please consider a donation at https://midcoastrecovery.org.