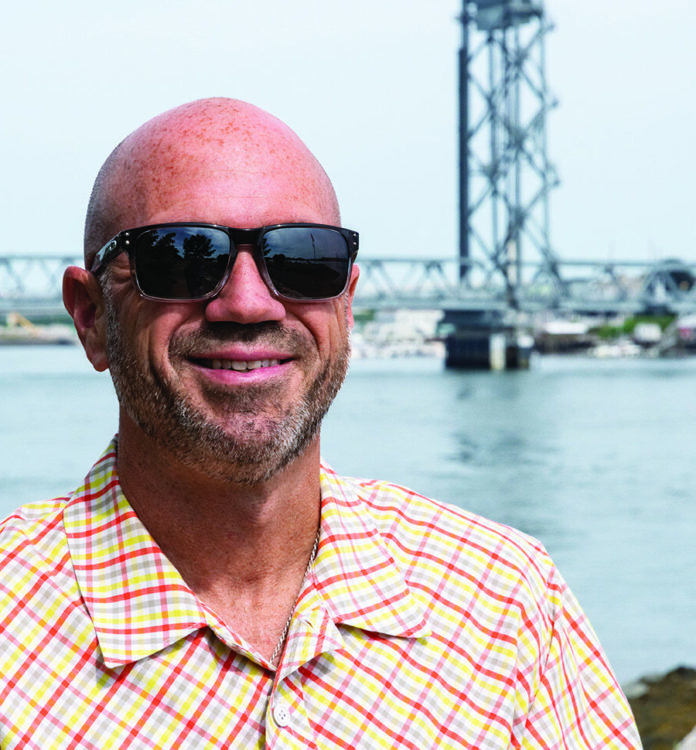 Losing his sight was a catalyst for finding his recovery path

Four years ago, Freddy Petrone spent his birthday at the driving range at Cape Neddick Country Club, and when he placed a ball on the tee and took a swing, it disappeared immediately.

He lost sight of every ball that came off his club, and he knew in his gut something was terribly wrong.

He lost sight of every ball that came off his club, and he knew in his gut something was terribly wrong.

Petrone, a daily drinker, relied on alcohol to cope with his diagnosis, and his heavy drinking kept him from enjoying what little vision he had left.

“My alcoholism at the time, to be honest, helped me get through that,” Petrone said. “I was losing my vision so rapidly it caused me to have severe hallucinations (Charles Benay Syndrome). I would look in the mirror, and my face would literally disappear in front of me. So I’d pour another drink.”

Petrone had tried to get sober from alcohol and drugs many times with little success. Shortly after losing his vision, he weaned himself off alcohol in order to visit his sister in Kentucky at Christmas. He spent three weeks in Kentucky, without taking a drink, but during that time he was very irritable. “I was so angry, I just didn’t care any more. I knew when I got back home to Portsmouth, I was going to start drinking again. The disease had such a grip on me. I made a conscious decision to drink myself to death.”

The night he got home, Petrone received a miracle phone call from Willis Eye Hospital in Philadelphia, Pennsylvania with an invitation to participate in a new one year clinical trial that could possibly restore his eyesight. In order to qualify for the trial, his liver enzyme level had to be below a certain number. Thankfully, his bit of abstinence while in Kentucky lowered his enzyme count enough for him to qualify and at the same time, he enrolled in the Carroll Center for the Blind in Newton, Massachusetts.

“The first day at blind school was the worst day of my life,” Petrone said. “When I heard the tapping of all the students’ canes, it hit me that I was really blind. I started pacing and yelling, ‘I’m f’in blind!!’ I just could not fathom what was happening to me.”

On the second day of school, Petrone was so angry, he wanted to leave but instead, he went to a 12 step meeting, which was offered once a week at the center, and after got down on his knees and prayed “God, please take away this obsession for drugs and alcohol.”

After 2 weeks, something clicked.

“God did for me what I could not do for myself. I got up at 4:30 am and started walking. I made a decision to stop feeling sorry for myself and from that point forward, I was determined to live.”

He attended the recovery meetings, and walked 6-10 miles every weekday. By the time he finished the 16-week vision loss program, he had lost 55 pounds, he was still sober, and gained a new sense of freedom and confidence.

When Petrone returned to Portsmouth from blind school, he dug into recovery and started going to meetings and working the steps. Through that process, he learned tools he needed to deal with his anger and accept life on life’s terms.

“The doctors said I could get my eyesight back in around 12 months so I was continuing to hang on and not drink. I was just waiting for that one-year benchmark to see what everyone looked like. As I approached a year, my vision wasn’t improving, nothing was happening. But I was still sober. And that alone was a miracle. Through my recovery process, and unbeknownst to me, I was building my foundation that was preventing me from relapsing.”

“After going through the 12 steps, I experienced a spiritual awakening, something I had never had in my life before or ever knew existed, and although I was mad at God for taking my vision away, I realized I needed to lean on Him the most throughout this journey. My sponsor instilled in me the importance of helping others, and by doing so removes any self-pity I may have.”

Without completely understanding how that worked, I trusted him and started to hand out popsicles at Market Square, without expecting anything in return.”

The cornerstone in Petrone’s life today is helping others. In sobriety, he continues to walk 15 to 20 miles a day in Portsmouth, often getting stopped in his tracks while crossing the Memorial Bridge when it lifts for passing boats.

In 2021, Petrone founded I Got Bridged, a nonprofit dedicated to serving people in need on the Seacoast, the name comes from his experience of getting stuck on the bridge and in life. “Getting bridged is not only a physical barrier, but a metaphor for life … how to get to the other side.” Petrone likes to say “once you cross your bridge, once you get unstuck, it is your ‘Time4Joy.’”

“In that first year they say it gets worse before it gets better,” he said. “It doesn’t just get better, it gets ‘through the roof’ better!! I can’t even contain myself. My biggest problem is that I have a hard time falling asleep because I can’t wait to wake up in the morning. That’s just the truth. I never thought it was possible to be this happy, especially without alcohol and drugs. The feeling that I get is pure joy.

In regards to helping others, the only way to explain the amazing feeling you get is to actually do it.”

Journey Team
The Journey Team is made up of writers, gatherers, creators and people with a passion to make recovery from addiction visible.
Previous article
Issue #22 Letter From the Publisher
Next article
Bringing Your Whole Self to Work