I fell in love with the guitar and songs in general at Girl Scout camp. When I was 10, my dad bought me my first guitar. We had just moved, and I was starting fifth grade in my third new school. A year later, my parents divorced. Through the turmoil, music became true solace. All these years later, it still is.

When I got clean, a very well meaning person said “If you want to stay clean, you should stop playing music.” I thought “If I can’t play music, I don’t care if I’m clean.” Renegotiate my relationship with music, yes. Stop playing, no.

The message was that drugs were part of music so therefore music couldn’t be part of recovery. And that music without drugs would be less creative. Both were wrong.

In early recovery, songwriting was a sacred form of alchemy that turned my new-found rage and grief into art. A way to know my new self, true self. A problem-solving tool. A grieving tool. A life-line.

Being clean also made it possible to eventually tour, show up on time prepared to perform, lead a band, book and promote gigs. And to write better, play better and sing better. It’s true that I had some good musical ideas when I was high, but the creativity was always in me, not the drugs. And getting high made it impossible to follow through.

Music is part of many people’s using-stories. But it can also be a powerful, joyful and important part of our recovery.

That’s why I started Music for Recovery in 2008. We want to destroy the myth that drugs and alcohol are necessary for creativity and showcase sober musicians as role models. The vision we hold is that evidence-based, clinically integrated music programming will become standard in treatment. If you are a musician in recovery, we’d love to hear from you.

Science shows the value of music to people in recovery. But it’s the stories of the people we’ve worked with, the over 750 songs we’ve written with clients, that show the true power music has to help people in their recovery. All names have been changed for privacy.

When the treatment center talent show was first announced, Carol put her head down and said “I’m not doing it!”

After listening to her peers choose songs to perform she said, “I’ll do it, but I’m only singing the chorus, and I’m not using the microphone or standing up in front of the group.”

Week 2: After watching her peers practicing singing on the microphone, she said “I’ll sing the whole song, but I’m not using the microphone or standing up in front of the group ,and I’m keeping my eyes closed.”

Week 3: Carol got an iPad with her song on it and a pair of headphones. She learned how to record herself singing to the track. After 30 minutes recording herself in the pantry, she came out and said “I actually don’t sound bad!”

Week 4: After listening to her peers’ recordings, playing hers for them, and watching them learn to sing through their anxiety, practice where to breath in the song, memorize lyrics, experiment with more confident body posture, and get support and positive feedback she said, “I’ll sing in the front of the group with the microphone, but I’m staying seated and keeping my eyes closed.”

Week 5: Standing on the side singing into the microphone, she suddenly opened her eyes and it was like watching a soul re-inhabit a body. Everyone gasped and clapped. Carol could not stop smiling.

Week 6: Carol did her hair and make-up, stood up in front of the group with her eyes open, shoulders back and recorded a music video of the song, with a dedication for her daughters that she was in treatment to get back.

At the end she wrote: “What I got out of music class is confidence. I was afraid to sing in front of my peers because I was always told I had a bad voice. This class made me believe that every voice is different, and I have a unique voice that is worth listening to.”

John’s Story: Together we can

At a 28-day treatment center, the group decided to write about having a second chance. One of the clients said “This is my 15th Second Chance,” so that became the title. When asked about how people felt about having another chance, one client who was still shaking looked up briefly and said with great weariness “here I am again,” which was a great first line.

When it was time for someone to try to sing it, to create the melody a shaky voice said “I’ll do it.” John had never sung before in his life, and he stood in front of the group and sang “Here I am again, scared and uncertain, can I do it? This is my 15th second chance.” He sounded like Tom Waits.

The room went still at the beauty and unlikeliness of it. When it came time to record, the group chose to have John on the mic and they surrounded him in a half circle. He was too foggy to track the words on the screen so they sang with him to guide him.

Years later we ran into people who had been in that group. They still remembered what a miracle it felt like, and how good the group felt about their decision to support and surround John so he could record.

Cheryl was 16, in treatment and struggling when she came into the studio and asked for a piano lesson. Like many people in early recovery, she was anxious and scattered but she really wanted to learn Für Elise by Beethoven. She was guided to slow down, to play one line at a time and breathe before repeating it, to stay relaxed when she stumbled and missed a note. After about 20 minutes, to her surprise, she could play the entire first page.

In the piano lesson she had the felt experience that slowing down created success and that she could do it. She wasn’t taught, shown or told. She experienced it while learning the music that interested her.

Music for Recovery is about creating experiences like this, embodied experiential learning in the music realm that translates directly into recovery success skills. We’ve been doing songwriting workshops, concerts, talent shows, teaching instrumental music and creating music studios in treatment centers nationally for over 12 years. We’ve seen it change lives.

Songwriting allows people to say things they can’t say in a meeting or therapy session. Songwriting can be used to create positive mantras with a melody that are memorable. They can be a concrete reminder of a lesson or event that someone wants to remember. For example, a song about what to do when you are triggered.

Group songwriting is not just cathartic and deep, it can also be seriously fun. The joy of working together to create something from nothing mirrors the recovery process. One client said afterwards “First it was intimidating. Then, it was possible. Then it was creative and fun. I felt proud at the end, something I haven’t felt in a very long time.”

If you are interested in adding music to your recovery, look around your area for open mics or songwriter groups. Many really talented musicians are teaching online these days. Look for a teacher who is patient and kind, not just a good player. Get a rhyming dictionary and play around with lyrics. Try one of the beat-making apps like Garageband or FL Mobile. Check out the many sober fan groups for bands like Phish, The Grateful Dead, Disco Biscuits and many more.

Many recovery centers have sober open mics. If you can’t find one, start one. Build in practice sessions where participants can get used to being on stage, singing into a mic, being in front of people and identifying step by step goals for improving their performances over time.

If you are already a musician and are new to recovery, you may need time to find a new way of being with your creativity. Performing and playing are amazing and also exhausting. Self-care is key. But I promise you, recovery will make you play better, sing better, write better and perform better. Rock on! 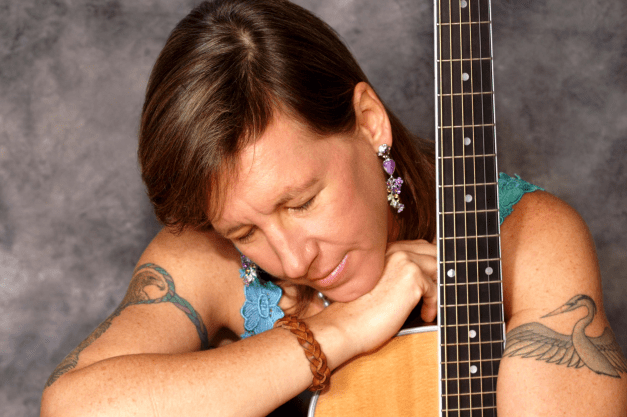 Kathy Moser
Kathy Moser is the Founder and Director of Music for Recovery, an award-winning songwriter, and teaching artist with over twenty years of experience in the mental health field. She founded Music for Recovery in 2009 to help people use music to develop recovery skills. She has served as faculty at the Rutgers’ Summer School of Addiction Studies, The Rutgers Arts in Prevention Program, New England Institute of Addiction Studies, as the Arts and Culture writer for Recovery Campus Magazine and has hosted a weekly podcast on creativity and recovery for City of Angels Recovery Radio. A 2016 study of Music for Recovery by the Recovery Research Institute at Harvard Medical School found that her work helps to instill a sense of cohesion and hope and catharsis. (Dr. John Kelly, et al) In 2015 she became the Music Program Director at Daytop NJ. She greatly expanded the program, attracted over $100,000 in donations, national press coverage, and helped Daytop win an award of excellence in addiction treatment from the NJ Mental Health Association for their Music for Recovery program. She holds certificates in Arts in Prevention, Motivational Interviewing, Trauma Informed Care, Experiential Therapy, Pyschodrama and the Nurtured-Heart Approach as well as a BS in Music, Business and Technology from NYU. She has given hundreds of songwriting workshops and concerts nationally. The over 700 songs created in Music for Recovery workshops have been streamed over 46,000 times by clients post treatment. Music for Recovery is currently under contract with Hackensack Meridian Health, Summit Oaks Hospital and the Center for Great Expectations. Kathy is passionate about helping people through music and her vision is that every treatment center will have a clinically integrated music program.
Previous article
Al-Anon: Personal Experiences
Next article
What Are Puff Bars?

The Power of Prevention-focused Coalitions