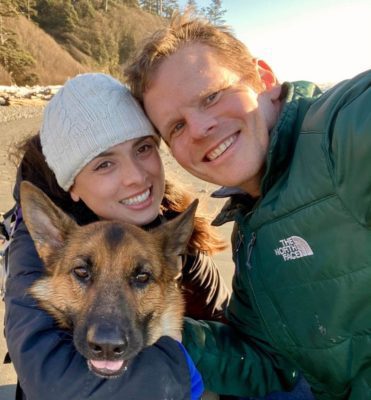 From Prison to Law School to Mountain Rescue

Christopher Poulos was born and raised in Portland, Maine, graduated from the University of Maine School of Law in 2016, and is now the executive director of the Washington Statewide Reentry Council in Olympia, Washington. He married his long-time girlfriend in a tiny, outdoor wedding ceremony last year at their home along the Puget Sound, and he’s part of a mountain rescue team. Chris has a great life, but it wasn’t always like this.

“I was 12 or 13 when I discovered that using drugs and alcohol melted away all of my internal anxiety, pain, and fear,” Chris says. “I added pills and cocaine, and then I spent the next decade of my life chasing that feeling of relief and belonging. I self-medicated by using substances to treat unresolved trauma and, for a while, it worked.”

By the time he was 24, he could no longer get that feeling of relief, no matter how much cocaine, opiates, or alcohol he consumed. “I was really at a point where I felt so broken and desperate and in such pain that I knew I needed to either seek help or no longer continue living,” he says.

With the help of a doctor, his mother, other people in recovery, and an intensive outpatient program, he started his recovery. Within a few months, he had a job at a call center, was in the process of resuming classes at the University of Southern Maine, and his health and life were improving. And then came the day that federal agents surrounded his mother’s home and Chris was indicted on five federal drug-trafficking and gun charges for conduct that occurred before he entered recovery. His court-appointed attorney was inept. In a phone call, the attorney suggested he just stay in jail until he was convicted, so he could put time served in jail toward his inevitable prison sentence. Chris recognized that this attorney was unwilling to even attempt to provide him with strong representation and defense.

With the help of family, Chris was able to hire a skilled private attorney, and within hours, he was released from jail and returned to working and focusing on his recovery. “That day is the reason I’m an attorney today. I knew I was privileged because I was able to gather the financial resources to hire a good attorney. As I walked out of jail that day, I committed to someday becoming an attorney to fight systemic inequality.”

Chris still ended up serving time in a federal prison, where he continued to work on his recovery. While he served his sentence and finished college, he never wavered from his goal to become a lawyer.

Getting into law school was a challenge, though. The dean was reluctant to risk the school’s reputation by admitting a person with a felony conviction. In a meeting with the dean, Chris was able to speak up for himself in an assertive and appropriate manner for the first time in his life. “I asked him why I should be excluded from the chance of being a lawyer. If the judge didn’t give me a life sentence, why was the dean?”

The dean was also concerned that even if Chris was admitted to and graduated from law school, he might not be able to get a license to practice.“ Chris’ argument was persuasive, however, and following an investigation and discussions among the admissions committee, he was finally admitted. “The initially reluctant dean chaired the committee that unanimously recommended my admission and, ultimately, warmly welcomed me to the school.”

After three demanding years of law school, Chris thought that the bar admission process would be relatively simple. “I figured that I’d apply, answer some questions about my past in an informal manner, and all would be good,” he says. “By the time I applied to the bar I had years of recovery under my belt and myriad positive community involvement and professional experience.”

As a law student, Chris represented youth facing criminal charges and served as a mentor at Long Creek Youth Development Center. He interned with the White House Office of National Drug Control Policy, which required national security clearance. He continued to sponsor people seeking recovery from addiction, including those who were incarcerated.

“I initially thought I’d pass the character evaluation for bar admission with relative ease but it wasn’t that straightforward,” he says. “Under Maine state law, if you have a felony conviction, you’re presumed to be unfit to practice law. You have to prove your character and fitness through a formal hearing process. I hired a lawyer and had to go through incredibly adversarial hearings where a criminal prosecutor cross-examined me for several hours. He brought up things I hadn’t thought about in over ten years.”

Now, Chris works on prison reform and reentry support in Washington state and has even taught a law school course that he designed. He’s passionate about making it easier for people leaving incarceration to get health insurance, education, employment, and whatever they need to successfully transition back into society. He’s also working on voting rights for people in prison.

Chris’ accomplishments are many. His story has been told in The New York Times and the Washington Post, and he has given a TED talk. He continues to challenge himself, having recently joined Olympic Mountain Rescue, an all-volunteer organization based on Washington’s Olympic Peninsula that is devoted to saving lives through rescue and mountain safety education. The parallels to Chris’ work in recovery are easy to draw. “I need to be part of something bigger than myself,” he says.

Being involved with a group of people dealing with potentially life or death survival decisions satisfies something deep within me. It’s similar to the feeling I get from being part of a 12-step program. The mountain rescue group is a way to bring an element of service to my interest in outdoor activities, like hiking and mountain climbing. I’m still learning though; I don’t think I’ll be hanging off the edge of a cliff to bring somebody up yet, but I’m part of the team and I’m able to help in any way that I can!”

Chris continues to advocate for the fair treatment of people with past-convictions, who, like he was, are routinely denied access to work, education opportunities, and housing based on behavior that often occurred when they were in active addiction.

That mountain is an especially challenging one to climb, but having reached its summit, he is determined to pull others up to join him.

Previous article
What’s Your (Ally) Language of Love?
Next article
The Process of Intimacy