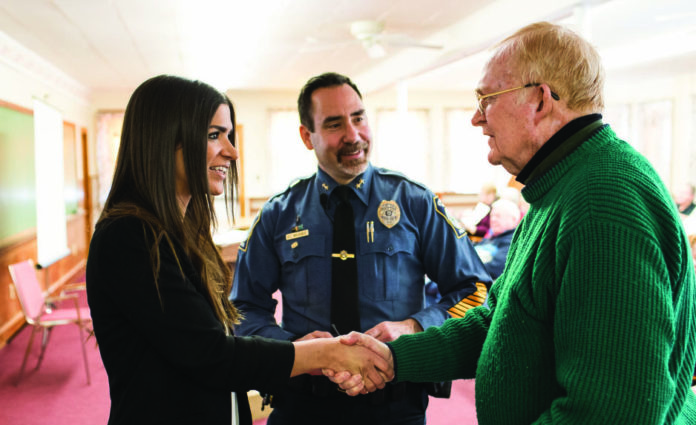 Making a clean break from where she was

Katie Rodrigues went to jail over a Milky Way and a scuffle with a man named Jackie Chan.

“That candy bar was a blessing, because I got off the streets,” says Katie, who had been homeless in Connecticut in the darkest years of her addiction. “I think the judge knew that I needed help.”

Nine years later, Katie has been in recovery for more than seven years. She lives with her partner Maria Ramos in a Biddeford apartment overlooking the river and WoodGrain Barbers, which they opened in 2018.

“We have worked really hard to change our lives,” says Katie, who met Maria in prison.

Three years ago, Katie connected with Kennebunk Police Chief Robert MacKenzie and Steve Danzig of ENSO Recovery, who invited her to tell her recovery story to groups as varied as rehabs, Rotary, juvenile detention and the Chamber of Commerce.

“I got the opportunity of a lifetime,” Katie says, adding that she spoke regularly for two years before the pandemic brought gatherings to a halt.

But periods of pause can be powerful times of reflection. That’s what Katie discovered after she went to jail over that candy bar and was finally— finally!—ready to claw her way back to a life without opioids, heroin or cocaine. She was 26 then, and it had been a decade since she’d had multiple surgeries for a deviated septum, had been prescribed Percocet and Vicodin and then began trying other drugs.

“I went from trying to be a normal kid, going to school and working, to losing my jobs and dropping out of college,” Katie says. “I was in trouble. I would ‘doctor shop’ and go to hospitals, and when I couldn’t do that anymore, I resorted to the next thing: heroin. My parents tried to help me a hundred times. Rehab, detox, in-patient, mental health evaluations—all the things that they tried to do didn’t work because I wasn’t ready to get clean.”

Her parents, Joe and Nancy Rodrigues, tended to play good cop-bad cop. As stress started to affect their health and their marriage, they met with other parents of drug-addicted children and determined that they had to set boundaries.

“I was homeless by the time I was 24,” Katie says. “I was living out of my car, and then eventually just on the street. I would call home, and then I’d lose touch. It went on like that for a really long time. It eventually took me going to prison—not once but twice.”

Katie got out of her first stay in a maximum-security prison in Niantic, Connecticut with three years of probation. But, after several months, she relapsed. High and hungry, she went into a Dollar Store, put a Milky Way in her pocket and walked out.

“The store owner ran out, grabbed my arm and said that he’d seen me steal and that he wanted what I had taken,” Katie says. “I threw the candy bar on the ground and thought that he’d let me go. But he didn’t. He yelled for someone in the store to call the police. I scuffled with him, and he was hanging on to me. I elbowed him in the face and broke his glasses where they connected, and it nicked him.”

Stealing a candy bar is larceny. But, because she assaulted the store owner (who happened to have the same name as well-known martial arts stuntman Jackie Chan), that was robbery. She served 19 months in prison, then she went back to the Dollar Store and apologized. She finished her sentence at a halfway house in Waterbury, Connecticut where she held down her first full-time job, walking to Dunkin’ Donuts at dawn.

“Slowly I got clothes and a cell phone with minutes,” she says. “Then I got a second job, I kept working, and I didn’t give up.”

But then her six-month stay at the halfway house ended.

Joe and Nancy Rodrigues, who had retired and moved to Kennebunk, got a call from their daughter’s parole officer saying that Katie needed a place to live where she would have a fighting chance to stay in recovery. Joe said he’d be there in the morning to pick her up. He told the parole officer, “If she’s not there, tell her don’t ever call us again.”

But she was there, thankfully, and she moved to Maine that day in 2013.

“It was the greatest thing I ever did,” Katie says.

Finally, she was ready.

After Katie lived with her parents for a month, Maria came to Maine and they spent a winter in the Rodrigues’ beach house, saving up for an apartment. By the time the barber shop opened in 2018, the Rodrigues family had met the MacKenzies, who also have a daughter with a recovery story.

“One thing led to another,” Katie says, “and I started speaking places with Chief MacKenzie, meeting people, and volunteering and going into rehabs and speaking with women. The response has been incredible. Everyone has someone in their life affected by addiction.”

Sometimes Nancy comes along and speaks from the parent perspective. And she’s honest that it took years for that mother-daughter relationship to grow beyond politeness and hope to deep, enduring trust.

“Now she calls me seven times a day, and I call her back four,” Nancy laughs. “We’ve created a best friend relationship— one that, I might add, we’d never had before.”

“My parents have gotten me through this,” Katie says. “I could never go back to the life I lived. And I could never do that to them. I was told a long time ago, ‘Play the tape in your head. Don’t just think about getting high, think about what happens after that.’ Sometimes people say, ‘Do it for you,’ but sometimes we need other reasons. Sometimes we need to do it for someone else.”

Amy Paradysz
Amy Paradysz writes for Journey, Maine Women Magazine, Green & Healthy Maine Homes and the Portland Press Herald. She has been a writer and editor for more than 20 years. She lives in Scarborough.
Previous article
Recovery Allies
Next article
Issue #22 Letter From the Publisher