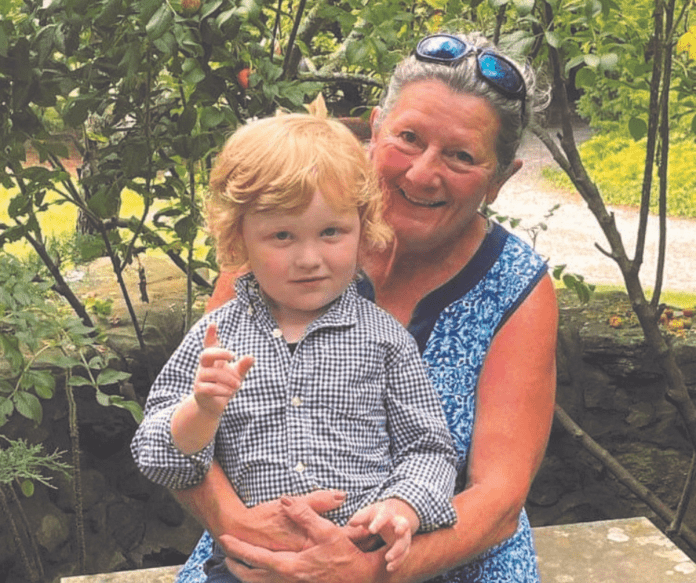 Rochelle Grant-Kenney lives in Hope, Maine with her daughter Kristina Lee and grandson Sander James. When she isn’t spending time with her grandson, she is serving as a community consultant for local task forces focused on substance use prevention and recovery. For Rochelle, family is what keeps her strong in her recovery, and the little boy that lovingly calls her “Mimi” is a daily reminder of all she’s gained back since becoming sober in 2009.

Growing up, Rochelle first witnessed addiction at home. At age 13 Rochelle started smoking cannabis and at 15 she began to drink. In the 70s and 80s cocaine and crystal meth were growing popular in Midcoast Maine, and she started to use substances frequently throughout her young adult life. She married in 1981, had a daughter in 1997, and a son in 2001. Rochelle experienced the tragic and sudden loss of her son James in 2001 and her husband in 2005. Her pain and grief led her to a growing addiction to pain pills, specifically Percocet and benzodiazepines.

Four years later another tragedy changed Rochelle’s life forever. She had been receiving medicated treatment from a methadone clinic since 2003, medication she sometimes shared with her brother, a local fisherman. One day, after getting a ride from her brother in the morning, Rochelle got a call in the evening that he had passed away. Rochelle faced 20 years to life in federal prison for providing him with methadone, but when police could not prove whether it was the methadone or another drug that contributed to his death, her sentence was changed to five years.

“It was not till I sat incarcerated, finally with a clear head, that I realized my parents had been right about everything.” Unfortunately, Rochelle’s father passed away while she was serving her sentence. He enjoyed 27 years of sobriety before then and gave back to others through mentorship and sponsorship.

Rochelle wanted to get and stay sober, but when she was incarcerated there weren’t recovery programs that she could access. Since then, programs have been pioneered in Maine for people in federal prison with drug charges. She became active in the recovery community as soon as she was released.

Rochelle faced difficulty finding housing or jobs and lacked support from family members who could not yet forgive her for what happened years ago. However, restoring these relationships became the driving force for Rochelle, who was reunited with her then 17-year-old daughter. With time and through sobriety, Rochelle was able to build back connections. “My mother looked down on me for a very long time. She passed away last year, and in the last two years of her life, we were able to mend our relationship and spend time together. I am so very grateful for that.”

Rochelle has a passion for giving back to others and wants to see a stronger recovery community built up locally. “I wanted to speak at schools so they could understand how dangerous sharing your medication can be. People never think something so terrible could happen just from sharing their prescription.” Prescription drug misuse among teens and young adults is a very serious and growing issue in Maine communities. Today, Rochelle is an active attendee at the Knox County Recovery Collaborative’s Community Consultant meetings and works to inform local recovery efforts with her years of experience.

Part of Rochelle’s vision for a stronger local recovery network is greater access to halfway houses or sober houses in the area where people can get back on their feet. She also hopes that the local community would understand more about the science of substance use disorder.

When asked what her long-term key to recovery is, Rochelle answers without hesitation, “It’s all for my family and my grandson. We want to give the younger generation better resources than we had. My daughter and I talk about what the world is going to be like when Sander is 15 or 16.”

Rochelle’s daughter graduated from the Wayfinders Program, and her mother could not be prouder. The pride is mutual. “I’ve come so far. I have my own car, and my own house. I have tons of friends in recovery. I’m just so grateful for what I have gained. To see that my daughter is also proud of me means the world.”

Jamie Lovley
Jamie Lovley is a graduate social work student living in Mid- Coast, Maine. She works in substance use recovery at a residential treatment facility and is the Substance Use Prevention Specialist at Knox County Community Health Coalition. She is passionate about using her experience in journalism and in social work to write recovery stories that fight stigma and inspire hope.
Previous article
Smober or Sober or $omething Else?
Next article
Sensational Radar