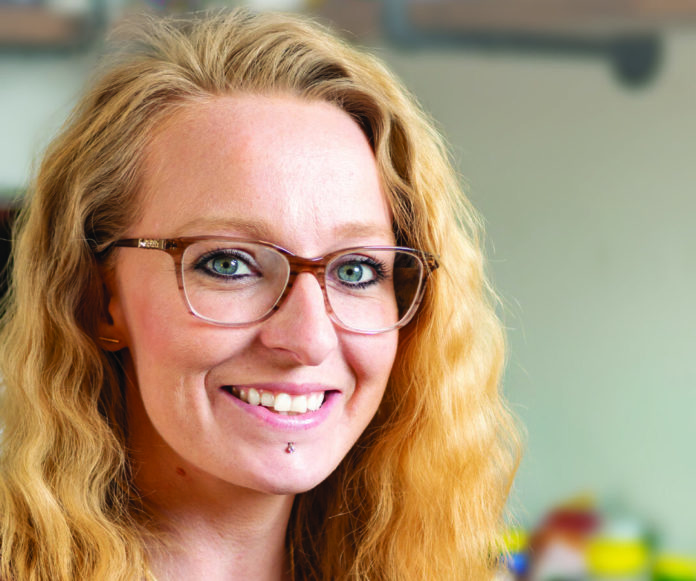 Come As You Are

A bathroom door closes in Auburn, Maine, but it does not lock.

On one side, four children run about the house. The television is on; there is unfinished homework and pacifiers, half-eaten food and a mess to clean. On the other side of the bathroom door is Sarah Langevin, taking a breath. This side of the door is small but sacred. Four little toothbrushes sit next to her own and a soft bath mat cushions her feet.

With each breath, Sarah feels her shoulders relax and her head quiet.

She thanks the frustration that bubbles up inside her.

She thanks the anger that may flare.

She thanks the exhaustion her body feels.

She thanks each difficult emotion for visiting her and keeping her alive, and then she lets them go.

Sarah looks up into the mirror and she smiles at her reflection. She is young and strong and beautiful. She is a mother and a wife and a supportive community member. Sarah is a recovering addict.

Sarah Heald grew up in Mattawamkeag, a small, rural town in Maine where the Mattawamkeag River bleeds into the Penobscot. Her childhood memories have a golden aura around them, with her parents together and taking her on adventures, supporting her, loving her. From early on, Sarah wanted to become a mother. What Sarah didn’t know, as she grew older, was why there was a void inside of her she needed to fill.

Outgoing and a little wild, Sarah experimented with opioids in high school. The people around her in that small town had plenty and were friendly, until they weren’t.

It started simply—as it often does. One type of drug at one party, a different one at another, whatever they had. But when the parties ended and the abuse within her relationships started, drugs became habitual. The void wasn’t getting any smaller, and nothing compared to that first high.

The fairy tale only grew dark.

Her parents split, and Sarah found a new companion to share with— her father. They used together and leaned on each other, neither of them knowing how to cope with the hardships that ripped the rug out from underneath them. It wasn’t long before Sarah devastatingly lost her father as he succumbed to the void.

She always told herself, “when I become a mom, I’ll stop all this.”

She came close a few times, and encountered even more tragedy without knowing how to cope. Then she made a different choice for herself. She wanted to get better, and she meant it. So the struggle to find resources began. She longed for a community, and remained in the same quiet town where everyone knew her, where she couldn’t escape her past, but it didn’t stop her.

True to her word, when Sarah became pregnant, she started getting Medication-Assisted Treatment (MAT), and was put on Suboxone to help her off the opioids.

In Auburn, where she was living and seeking help, they had a no-wait policy for pregnant women so she got started right away. From that first step of deciding that her life was worth it, that her child’s life was worth it, she gained a whole community. That, she says, is what gets any addict through.

There is not one type of addict.

There is not one way that an addict can look. How addiction manifests and is managed is individual. Many times, Sarah endured nurses and other addicts looking at her only to say, “you don’t look like an addict.”

But across that threshold, in the church, was a circle of people who reached out and held her close. She was building a community. “Recovery,” she says, “doesn’t discriminate.” She was meeting people who wanted her help and wanted to help her. They were all learning how to cope and discovering tools they had to support their recovery as well as hers.

No one can do it alone.

Within a community, each hand can support you in difficulty and celebrate you in happiness.

Today, Sarah lives in Lincoln Maine and is a Recovery Coach Coordinator at Save A Life Correctional Recovery Resource Center, the only non-profit in the Lincoln Lakes Region. SAL, Inc was approved in 2018 as a domestic Maine non-profit corporation and received a grant from the Maine Department of Health and Human services in December of 2020 as the pandemic took hold and more and more people turned to drugs.

Krystina Murray, a writer for Addiction Center, called 2020 “the Deadliest Year in Drug History.” This is when Sarah Heald found SAL, Inc and began volunteering. She also runs a twelve-step program out of that local church, successfully guiding others through the difficult process of recovery through the familiar twelve steps and abundant community. “I’ve never had somebody come to a meeting and not come back,” she says. This is a massive achievement and a testament to her compassion-based practices.

There are so many paths toward recovery, what works for Sarah may not work for everyone. It’s something that she stresses when speaking about it.

She spent so much time resisting recovery because of lack of resources and while there are more and more resources nowadays, the trick is to want to get better. You have to seek it out yourself, try different things.

Maybe God doesn’t work for you, but spirituality and mindfulness may.

Maybe MAT isn’t right for you and you need more therapy-based treatment, like CBT or REBT. Some people need to quit cold turkey, hard and fast, while some people need the time the twelves step program offers.

Regardless of what the road looks like, we all need someone beside us, to pick us up when we slip and cheer us on as we progress, to have room in their hearts for us. That is what Sarah is dedicating herself to, and who better than a woman who knows the power of it?

Through her personal journey, Sarah has learned to recognize the humanity in recovery, through those she helps as well as in herself. Drugs dominated her formative years and now, she’s learning who she is without them.

Not just learning, but loving. That’s a practice, as well.

She is embracing all that she is without the drugs trying to fill something impossible.

Sarah has seen addiction as what it is—a trait of hers that can’t be exercised. So, she works it—it’s ceaseless work, and thankless, at times, in such a busy house. Raising four children without struggling with recovery is difficult enough, but each little life depends on her and she does not let them down. In the mornings, she pulls an affirmation card to keep her focused on gratitude and abundance. Often, her children’s hands are the ones pulling the card. They practice together.

Sarah turns to God to surrender, to help guide her when she doesn’t always trust herself to do so.

For a while, Sarah ate ice cream. Every night. A sweet, harmless ritual though addiction made manifest.

She often turns to physical activity, running and running until she can’t, lifting weights in the living room, and putting her body to work.

She puts herself at service to community members and strangers alike, helping them through the most difficult times of their lives.

She pays attention to what she watches on television and how she feels while watching.

She pays attention to the needs and identities of the people around her with the utmost care and recognizes that, hey, everyone is different, but we all need love.

When she turns to that bathroom mirror, a quiet dimension of her own creation, she says, “You are smart and capable, you are beautiful, you are worthy of everything you want. I love you.” She says, “I love this life I have created.”