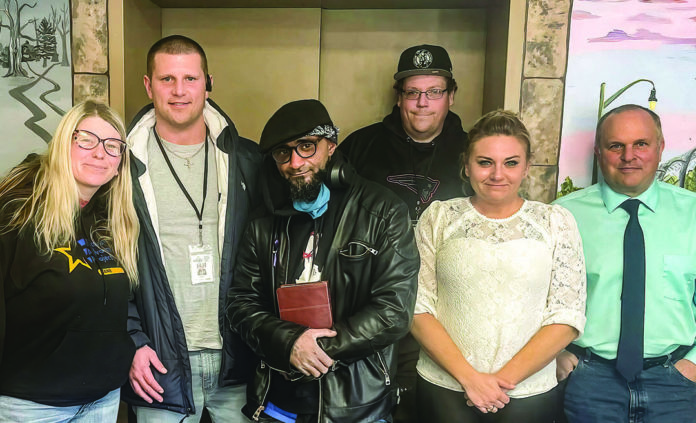 The state of Maine has a relatively high rate of recidivism, but the Maine Prisoner Re-Entry Network (MPRN), in partnership with the Maine Department of Corrections, is working to change that.

According to Bruce Noddin, the founder of MPRN, “The number that typically gets thrown out is that somewhere between 75-80% of all people in custody suffer from substance use disorders or have a substance use history.” “But,” he adds, “If you ask folks inside, it’s a lot higher than that.”

Bruce was part of a jail ministry in the Androscoggin County Jail, but there was little support for people when they returned to their communities. “I just kept saying, ‘This is all great, but what are we doing for these guys once they leave?’ And the answer was ‘nothing.’ There was no follow-up. So in June 2017, the head of Catholic Charities social ministries said ‘why don’t you create something?’”

“From DAs to prisoners and everything in between,” says Bruce. “There’s a ton of collaboration going on.”

The network that resulted, MPRN, now holds a “weekly statewide convening” every Tuesday morning, with 60-80 people from all walks of life — “From DAs to prisoners and everything in between,” says Bruce. “There’s a ton of collaboration going on.”

Prisoners have access to network resources nine months to a year prior to their release. “We connect people with recovery residences, recovery coaches, workforce development. We bring in family members, friends, faith-based organizations — whatever their pathway is, we want to help that person discover it,” Bruce explains.

“And I always add ‘dare to dream,’” he continues. “We say, ‘Is there something you’re really interested in? Let’s see if we can pursue this.’ We bring people to the table who can make these things happen. This is about building a life, putting some passions in there. People on the outside have these check boxes: a place to live, access to food, a job, and you’re all set. But we’re here to say, ‘That’s not life. That’s survival.’”

In addition, MPRN created a support group for families called Rose’s Room, initiated by a mother whose son was incarcerated. Prior to the Covid pandemic, there were 11-12 chapters of Rose’s Room. Currently there is a monthly statewide meeting, and some local meetings are getting started again in-person. “It’s a beautiful way to support people who are in this situation,” Bruce says.

One of many people who have benefited from MPRN’s programs is Kelli Johnson. “I met Bruce Noddin at the Southern Maine Women’s Re-Entry Center, just 10 days after I had my daughter, in prison. I looked at him and said ‘I’m going to work for you some day.’” Kelli is now Director of Administration at the Augusta Recovery Re-Entry Center (ARRC).

“Being separated from [my children] and my newborn daughter, it hit hard,” Kelli says. “I’m really thankful that when I did get out, MPRN was there to support and guide me along the way. A lot of people get out of jail, and they’re forced back into the same lifestyle because nobody will give them a chance,” she adds. “I was one of the lucky ones. MPRN gave me the chance, and I’ve been able to prove myself along the way.”

“We just want to make sure that people know we are here,” adds Bruce. For more information, visit www.re-entrymaine.org.

A very special thank you to Bruce Noddin from Kelli Johnson

Where would some of us be without Bruce Noddin and the rest of the Maine Prisoner ReEntry Network Team?

Sometimes all it takes is for someone to believe in you, give you a little direction, and whisper kind words of support in your ear.

Bruce saw past my criminal record and past mistakes, recognized my talents, and has opened doors for me that I never knew were possible.

I would like to send a huge thank you to Bruce and the rest of the MPRN team for believing in me as well as so many other currently and formerly incarcerated Maine citizens.

I thank you all so much for your support, and I am honored to be an MPRN employee.

Kim Wilson
Kim Wilson is a freelance writer and editor who lives in Bath, where she enjoys exploring the Midcoast, gardening, and renovating her WWI-era home.
Previous articlePersonal Recovery Story: Christine Maider
Next articlePRCC Turns 10