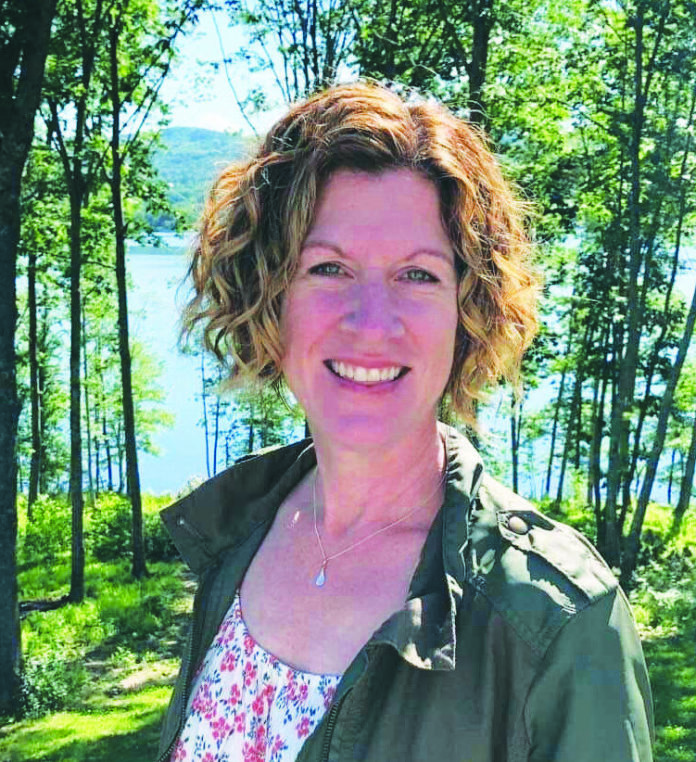 Maine Voices of Recovery is a series written by Jamie Lovley and created by Knox County Community Health Coalition in partnership with the community. The goal of the series is to teach the community about recovery, dispel misunderstanding about substance use disorder in the state of Maine, and record stories of how long-term recovery does work. All names have been used with permission.

Becky Peasley has been a nurse in the state of Maine for 25 years, but her passion for helping others extends far beyond work. She is a board member for the Coastal Recovery Community Center and speaks in jails, at committee meetings, and at other local opportunities to educate and inspire others.

Before living in South Thomaston, Becky grew up in Tenants Harbor. Today she lives on Sennebec Lake with her family. “It’s so beautiful, I consider it a gift of my recovery to be able to build a life I don’t need a break from.”

Growing up, Becky was an active and successful teenager. She got good grades, played sports, and made her family proud. She remembers that drinking alcohol for the first time at a friend’s house at 13 made her feel better about herself. “When I was drinking, I was a person who was prettier, better, and more confident. Everything felt alright.”

After she graduated and became a nurse, drinking stayed an outwardly controlled constant in her life. It was in her thirties that things began to change. After her first marriage abruptly ended, Becky recognized she was losing control of her drinking and needed to stop. With the support of her family and friends, she made the decision to become sober for the first time. At her best friend’s wedding, Becky met and fell in love with the man who became her husband. “He has always been 100 percent supportive of me. He has never once shamed me.”

During this period of sobriety, Becky found herself obsessing over alcohol and being angry with herself. The support she had garnered from her loved ones kept her from picking up again, at least publicly.

“I had learned growing up, as long as it all looks good from the outside, everything is alright.”

She drank before social events and in private, trying to maintain neat appearances.

Eight years ago, during the second inning of one of her children’s softball games, Becky realized she could no longer go on like this. It was while she was drunk in that softball field parking lot, being helped to her car by her husband and mother, that Becky admitted, “I need help. I don’t care what I have to do.” She messaged someone in recovery, and met them the next day. That was the last time Becky drank alcohol.

In her newfound sobriety, Becky stayed active in her recovery, and continued her work as a nurse. Four months later, she had two unexpected surgeries and was prescribed medication to manage her pain. She had taken medications incorrectly while drinking in the past, but she knew exactly how many she would be given, and reassured herself that she would be done after they were gone.

With every follow-up appointment and complications from the surgery, Becky received more medications. After her husband had a serious hockey accident, things escalated further. “He took one, and I took the rest.” What started as two pills a day became ten, and then twenty.

Becky feared asking for help and losing her ability to be a nurse, or having her medical history stigmatize her. “I knew how people in the medical field can make judgments about people with substance use histories.”

Everything came to a halt four months later, when her employer found out. With her nursing career on the line, she called her husband and said, “I need help, please come get me.” His response to her was simple. “Where are you? I love you, and we are going to get through this.”

“I felt like such a bad person, but I knew that my disease was just going to keep growing arms. I was so ready to be done.” For hours Becky and her husband drove around calling numbers to try to get her the help she needed. No one answered. And no one called back for weeks. “It was terrifying wanting help and not being able to get it. For those two weeks, I could only go from my couch to a meeting. I had so much shame, all I could do was go to three meetings a day.”

Those meetings and people’s stories gave Becky glimmers of hope. Eventually, she was able to join an intensive outpatient program and found a therapist. Her supports in the recovery community kept her transparent.

“Everyone told me you have to be 100 percent honest, willing, and open-minded. If it’s in my mind, it has to come out of my mouth.”

After this, Becky had to return to her former workplace for surgery to assess a mass for cancer. During the most painful and hopeless hours of her addiction, she had wished it would be cancer. Becky faced returning to the hospital for another surgery head-on, fully aware of the risks involved and the concerns her loved ones still had for her. She woke up from her procedure telling her former coworkers, “I don’t take anything I’m not supposed to anymore.” Her surgery was successful, she did not have cancer, and she had taken a massive step in her recovery toward freedom.

Becky eventually made amends with her employer, and another gift of her recovery was returning to nursing in acute care. It wasn’t always easy earning back people’s trust, but she shared her story freely in hopes of educating others about the disease of addiction.

Becky’s experience became a model for her workplace to change how they handled assisting employees in need of help with substance use disorders in the future.

Today, Becky is passionate about creating more life-saving recovery resources in the community. “Two weeks to wait for help is too long. Sometimes 24 hours is too long.” Becky advocates for better access to treatment that makes early intervention possible. Creating more accessible resources in the state of Maine is the only way we keep sick people from getting sicker.

Jamie Lovley
Jamie Lovley is a graduate social work student living in Mid- Coast, Maine. She works in substance use recovery at a residential treatment facility and is the Substance Use Prevention Specialist at Knox County Community Health Coalition. She is passionate about using her experience in journalism and in social work to write recovery stories that fight stigma and inspire hope.
Previous articleCouples in Recovery “It’s Complicated”
Next articleRecovery Community Center Corner