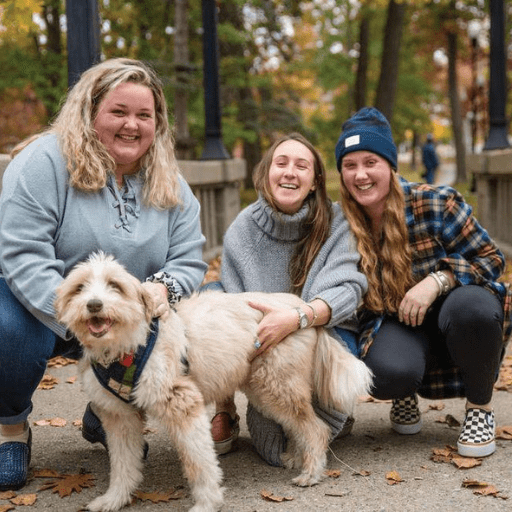 Recovery for a Family with Carly and Brinn Flagg

The Flagg sisters understand feeling alone and like they don’t fit in. Luckily, they’ve been on a journey together and found each other at the other end of it. Five years apart, Carly and Brinn Flagg grew up in a loving, tight knit family with their parents and middle sister Haley.

The youngest of the bunch, Carly Flagg, held her uncomfortable feelings the tightest. Despite having a loving home and “doing everything right,” she felt she just didn’t fit in. Carly became an addict.

From marijuana and drinking to opiates and heroin, Carly worked to fill a void she couldn’t explain. She dropped out of college after one semester, moved in with her parents, and created for herself an “unmanageable life.” Her desperate disease had her swiping her father’s golf clubs, the contents

of her sister’s purse, her mother’s engagement ring, anything she could grab and sell so she could maintain her addiction. Her family had supported her through a handful of treatment centers and sober living facilities and nothing had stuck yet. It was all simple, but it wasn’t easy.

Carly’s turning point came with a fright. Her father had found her overdosed in the family bathroom, just in time. She was in the ICU for four days.

“She asked herself, What am I going to do? Because if I keep doing what I’ve been doing, I’m going to die.”

Carly sought out her recovery with a new dedication and motivation. She went to Spring Hill Recovery Center in Massachusetts for 45 days and found success. They encouraged her to move 5 hours away to Portland, Maine.

Founded in 2010, Grace House for Women, the first managed women’s recovery residence, is where Carly stayed when she took the advice and moved to Maine. She stayed there for 9 months. Carly worked a 12-Step program, made difficult amends, and found herself and a community of women who she fit in with.

“I don’t know how people get sober without [community],” she says.

While Carly was struggling, her family struggled with her. Her oldest sister, Brinn, was in Brooklyn. Brinn tried to distance herself, so she wouldn’t have to watch. She tried to convince her family that Carly’s substance use was a real issue, but they just couldn’t see it.

At a distance, Brinn felt the weight of her sister’s battle, but had no one to talk to about it, no community to surround herself with, and no support. Now, she started to feel like she didn’t fit in. Brinn kept herself busy, but felt unfulfilled at her start-up job, unseen in her group of friends and uninvolved with her family. So Brinn took a page from her little sister’s book and moved to Maine as well.

Now, both sisters have a support system and a community, in their family and in their city. The two of them spend more time together than ever, powerlifting and helping each other grow. They also find they fit in wherever they go. Both sisters have discovered confidence in themselves they didn’t know existed.

Carly has also found her own self worth and tools for stronger communication, saying, “I don’t shut down anymore. Catholic family members usually don’t want to talk about anything. Now, I’m a big proponent of talking it through. I remember a lot of yelling when we were growing up and we don’t do that anymore because we can talk it out. We have the tools to have a tough conversation… I don’t even know how this is possible, but I love them way more than I could have before I was in addiction and while I was even in addiction.”

Brinn has begun to trust herself again, saying, “I think when you are in this with somebody who’s struggling, there’s a lot of moments where you just don’t trust your own intuition. When you work any program – it could be a 12 step, it could be working with your peers, it could be with a therapist, really it’s work. You know, Carly says it the right way: It’s simple, but it’s hard.

“I think that’s when you start to regain the pieces that were lost. Where you’re like, okay, I wasn’t crazy. I’m not alone. My experience is definitely shared by others. Those feelings are not unique to me. I’m a unique person, but the feelings that I have somebody else has [also] experienced and that is okay. And share that experience so that you can help others.

“That was what slowly did it for me, was saying like, “I can trust myself in this…I can trust that things are going to work out no matter what.”

Through this recovery, their whole family has been on a journey.

The sisters leave space to be grateful for their family’s strength and support that they can come out of this stronger than ever.

They also acknowledge that, in some regards, they’re very lucky.

Lucky that their family had the resources to help through Carly’s addiction, financially and emotionally.

Lucky that they have each other. Both Carly and Brinn acknowledge that their situation could have been much more difficult and chaotic had their circumstances been different and that many people dealing with recovery are not so lucky.

Within their own recovery communities, the Flagg family has learned that recovery is about coming together.